From East To West – Across Outback Australia

There’s so much to explore in outback Queensland and beyond…. so join us on our journey as we head across Australia’s outback from east to west. Starting from the Sunshine Coast in Queensland, back to Western Australia.

Must be something to do with this La Nina effect the third year running,  but unfortunately the Sunshine Coast just wasn’t living up to its warmer reputation.  With more rain forecast, heading west into the outback surely must be a good option… we hope…. 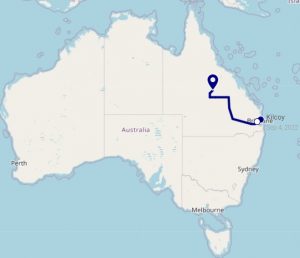 Heading west takes you into beef country. Maybe its an unfortunate name, but Kilcoy, we’re told “processes” some sixteen hundred head of cattle per day. They used to call it abattoirs, but now its food processing!

A stopover camp overlooking the beautiful and peaceful setting of Lake Cressbrook, offered more kangaroos than a Kangaroo Farm grazing all around the lake.

Rural towns that boast a Tidy Town Award, generally reflect a vibrant community. So it came as a shock to find Acland, a Tidy Town Award winning small country town with nearly all its houses removed. See the video below where one of the last remaining residents  explains the story behind this now controversial town….

Roma in Outback Queensland is home to the southern hemisphere’s largest sale yards where you can pick up a bull from around five thousands dollars… if that’s what you are into!  It is also well known for  the discovery of natural gas.

Carnarvon Gorge offers a great experience. Its like the Gibb River Road but on foot. A path through the middle of the gorge leads to paths that branch off into special features such as aboriginal rock art, an amphitheatre, etc.

After an extensive full day walking the gorge, Emerald offers a day to rest up.  A large rural town in the Central Highlands, it is the gateway to one of the largest sapphire fields in the southern hemisphere. If you thought your childhood days with a bucket and spade were over, not for everyone. In the nearby gem fields, grown people (like us) spend $25 for bucket of dirt. Its called fossicking and you will generally be assured to go home with some collection of gem stones. Look out grandkids!

Jericho on the Capricorn Highway boasts the smallest drive-in theatre in the southern hemisphere. But, darn, it only operates the third Saturday of the month and we missed it.

If you are or have been an employee, you probably have the town of pubs but most now shut, Barcaldine to thank. It’s here the government Labour Party has its roots, establishing the foundation of the organised representation of labour. Just dont build your hopes up on getting a pub meal here though… 🙁

You gotta love the outback. In the middle of nowhere, there’s Lake Dunn. Beautiful spot to camp, right on the waters edge. Plus its right on the 200km sculpture trail featuring life size sculptures made from all things metal and other bits and pieces.

Next week, we continue further west. In the mean time check out our facebook page for regular updates

Here’s some of this week’s highlights….

And we meet Glen, one of the last remaining residents of a once award winning town small rural town in Queensland that sadly has now been sold off….

2 comments On From East To West – Across Outback Australia