I Couldn’t Believe Me Luck…

Only in the Northern Territory…. well actually only in Australia. Most other countries celebrate their national day with a day of grandiose pride. Their celebrations reflecting a colourful rich historic past.

Not ‘ere mate. Naaah, we’re still arguing over which date we should be celebrating. Though May 8 seems to be getting strong support. Mainly because it sounds like maaaaaate. (For you non Australian folk, “mate” translated to other languages is friend, buddy, pal. The culturally correct way of pronouncing “mate” is to draw the “ah” sound out right until you have just enough breath left to complete the “t” sound. Just a note of warning, if you’re about to visit down under, make sure you practice otherwise no one will have a clue what you’re saying)

So back to Australia Day… even our national song is unique. It’s unique because no one has a clue what the words are. The only ones that do are our Olympic athletes. And that’s only because it’s a compulsory module they have to take at the Australian National Sports Institute.

For the rest of us we mime it. Even if you did learn the words, no one understands what 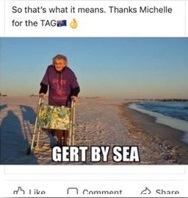 it means. Like that one bit. “Our land is girt by sea”. Girt? Where the hell did that come from? Fortunately I finally got an answer to that long outstanding question. And I’m not the only one it seems. Across Australia today could be heard “ah ha” as a picture was circulated across the country through social media. I suspect it may have been leaked by the government to finally put an end to this age old mystery. It’s a picture of an old weathered looking lady walking along by the sea. Her name, the title of the picture says, is Gert by sea!

Now folk in other countries on their national day, adorn their finest attire as they line their streets. Waving with patriotic pride as their uniformed parade passes by with disciplined precision. Nah, not ‘ere mate. Not us lot. We ‘ave a ute muster, or to be locally correct, a ute run. (Once again, to translate, a ute is what you guys in North America call a pickup truck. A “Pickup truck Run”. Sorry guys, that doesn’t quite cut it.)

But there’s no questions about the Aussie Day pride you see lined along the 40km stretch of highway heading south from Darwin. Waving with pride as the highly anticipated flag bearing utes, honking and beaping their way past the adoring crowd.

But it’s a complete mystery that they all know where to go. Even the locals at the rally point, this place called Noonamah, have no idea. They wear signs on their t-shirts, and signs on their buildings, “Where the hell is Noonamah”. If they don’t know, how can you expect four hundred utes heading their way to find it. But somehow they did. Because the celebrations were well underway soon after their arrival.

First there’s the thong throwing competition. (Another translation for the rest of you folk on the other side of the globe, it’s what you call a flip flop). Well, looks like I’ll be back here next year. I’ve got a title to defend. The Noonamah Open Division Thong Throwing Competition. Yep, cleaned ’em up I did. Grabbed me thong I did. Next thing I knew it was clean over the boundary fence. Couldn’t believe me luck. Neither could the gobbed smacked look of the locals. Especially when they handed me the hundred dollar prize. Though I had to quickly buy the runner up a drink of JD before he lodged a protest. (Just between you and me, I’d be going back to Peru again to pick up another pair of their thongs).

And of course what better way to round up our national day of pride than the Annual Muffler Throwing Competition (that’s right, you read right, a car muffler).

God save the Queen. She must be so proud of us.
Happy Australia Day.

Have you ever wondered where the name thong comes from while the rest of the world calls them flip flops? I was on a mission to find the answer….

UPDATE…
The My Senior Gap Year Book is on the way. Expecting arrival from the printers this coming week and should be in the mail to you soon after. If you haven’t ordered your copy yet, grab a copy now while the special package is still on until the end of this month. For more details please see myseniorgapyear.com.

Book Launches –  With the books now on their way, book launches are now being scheduled. Find out more at myseniorgapyear.com/events.  Love to see you there.

Check out facebook.com/myseniorgapyear for weekly videos and updates.

2 comments On I Couldn’t Believe Me Luck…