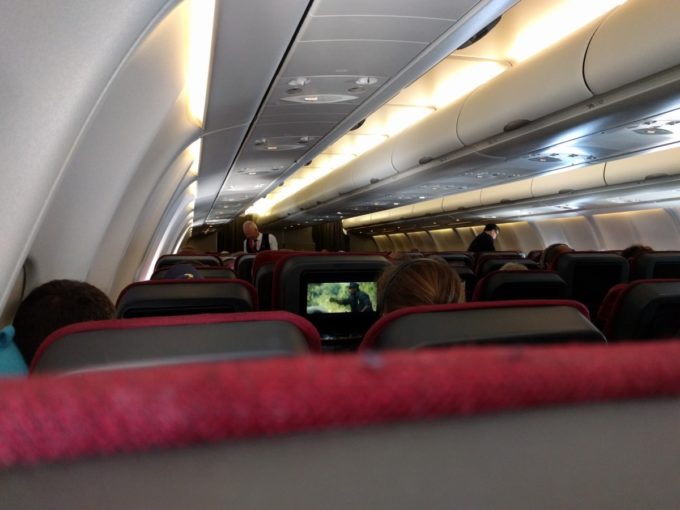 We exchanged polite pleasantries as we settled in for the eight hour flight ahead. We are by nature a territorial creature. Defining our space, and our rights to it are as ancient as human existence. From children’s play areas, to neighbourhood fences, through to national borders. We defend the entitlement to our “space”. From peaceful coexistence, the threat of border skirmishes to outright war is ever present.

A simple armrest defined the boundary between our seats. However it was clear before we even took off, our border was on the verge of disputed territory.  I feared a silent conflict was emerging.

I don’t know who designs these things. But how simple would it be to make these arm rests just slightly wider to accommodate two arms. And what about including a little plastic fence along the middle of the arm rest to clearly define the border and prevent any spill over into disputed territory.

No. Instead hours of otherwise relaxing reading time is consumed with plotting the next move. Carefully timed strategic moves to secure the next prominent stake on this highly valued armchair real estate. This of course also impacts drinking and eating tasks. Such activities  now need to be relegated solely to the other arm to avoid losing the well fought out stakehold position.

The only other option to secure any rightful share of this armrest border territory, requires much more patience. Taking a position at the far rear end of the armrest. Any lapse by the defending party provides an immediate opportunity to advance up to stake a more prominent position.

As with any dispute, the rational and commonsense approach would of course be to throw down arms and negotiate a settlement. I’ve thought about that. But seriously, how would you open up the discussion? Would you propose a rotating schedule timetable, or split the flight time between front and back half?

I was fortunate. While we both had silently set about claiming our territorial right to this insignificant piece of plastic, it was clear we both had a reasonable sense of fairness. I didn’t keep count. But I think we gave each other fair turns, without the need to uncomfortably raise the subject.

Despite this potentially turning into a full blown armchair war zone, we departed amicably, briefly chatting and wishing each other pleasant travels.

Maybe I’ll get to read my book next flight!