What a great idea. A pub that also does haircuts … where you can actually come out looking smarter than when you went in!!

Which is what we found at the Wellshot Pub at Ilfacombe on the Capricorn Highway. A Father’s Day Parmi and a pint for lunch, and a clean up at the same time!

Further along the highway at Longreach The Stockman’s Hall of Fame, showcases the real heart of the Australian pioneering spirit. Across the road the Qantas (actually called the Queensland And Northern Territory Aviation Service) huge 747 jumbo jet is a striking feature entering the town. Comparing this against their first plane that flew out of Longreach just one hundred years ago, is extraordinary. 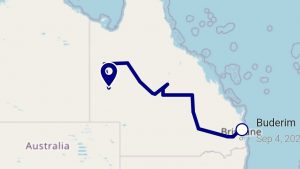 Our history further reveals itself at the Waltzing Matilda Centre at Winton. The significance of our nation’s unofficial anthem, Waltzing Matilda, is such there is a centre dedicated to this one song. A song that continues to strike a national chord with the Aussie battler spirit.

While we will never get to experience the raw conditions of our earlier pioneering days, the outback has so much to offer. But not every overnight campsite is an amazing experience complete with a crackling campfire set alongside the banks of a gently flowing river against a star studded sky on a warm balmy night, such as a delightful free camp site at Julia Creek.

Sometimes it’s great to park out the back of a country pub and enjoy a bit of local culture. … even if it means accepting the last available spot behind the Winton pub next to a row of garbage bins… 🙁

This is definitely mining country though. A sign in the women’s rest room in Mt Isa advises how to live with lead… like covid, keep washing your hands…?? Then there’s the once thriving town of Mary Kathleen, a town of 1100 people in the early 60’s. But after the uranium mine closed down in the early 80’s, the town was sold off. All that’s left now are the foundations and the roads, plus cows and grey nomads… in equal numbers I reckon!!

It’s the abundance of minerals in this part of the country that is one of the suggested reasons for the unexplained Min Min bright lights that appear at Boulia. Boulia is the last stop on the Queensland side of the border of the  Australia’s Longest Shortcut, Americas equivalent to Route 66. A rustic four wheel drive shortcut that connects you from Cairns on the east coast to Perth on the west coast.

The numerous sightings of the unexplained bright glowing Min Min Lights have been known to hover from far away to right in front of you. Said to have shaken even the hardiest of men in this part of the country over the last hundred years, yet with no scientific explanation.

As the locals say, you wont find them, they will find you…. nightfall in Boulia yet awaits us!